School breaks are a time when kids are SOOOOOOO bored from all their freedom. While I’m not a fan of scheduling every hour of a holiday with activities ’round the clock, I love having activities in an idea box ready to go if our imagination has gone kaput and we’re in hour three of the bored whines, the chore jar is empty, and as much as I love them – I can’t handle one more episode of Pinky and the Brain!

Here is a great activity for kids where you can put out a few craft supplies and walk away (but not too far away – there are scissors involved!) Sock puppets provide hours of fun – and in the case of our first example….hours of gross fun for boys!

And honestly….don’t you want to create some of these just for yourself?! 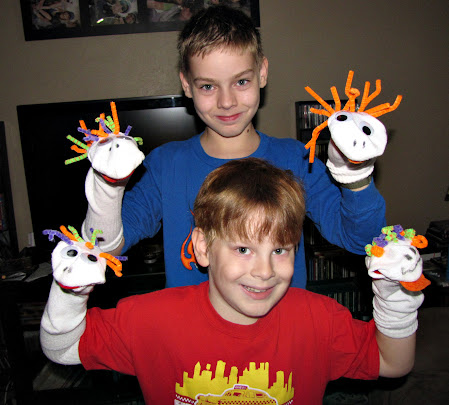 It’s no secret that our family loves Alton Brown. He’s a geek like us, and his great imagination at making science and cooking accessible with puppetry fun stole our hearts. One of our favorites are the Yeast Puppets – burping and gaseous and our boys love them!

<< Don’t understand why they are burping? If you have some dry yeast, put some in a bowl with a little lukewarm water and some sugar and see what happens. This makes a great science lesson for the kids. Plus…kids just love to burp! Don’t have any yeast? You can do it with vinegar and baking soda, too. It’s a similar concept of gaseous explosions.>>

To prepare for an event with Alton the next day, we decided to get our sock puppetry badges behind us – making up a family of burpy yeast puppets. This tutorial walks you through tips on making the pipe clears stick without weighing down your sock, and can be great to modify for more girly sock puppets, too.

Make Your Own Sock Puppet

Take a pair of socks. We went with white athletic because in a house full of boys, there are dozens of unmatched white socks sitting in our sox box. But you can use any wild kind of sock to do this with.

We chose to cut our pipe cleaners down to 1/3 the size – worked great for smaller hands. The one with all orange hair above is a half pipe cleaner worth – for a larger hand.

Do a test on where the child’s hand falls and how the pipe cleaners need to be placed unless you love the crazy hair all over the place look.

We poked the pipe cleaner into the sock, then threaded it under….

…and back up through the sock – making it stable, no need for knots or twists to keep it in. Just be careful not to poke little hands. Hubby came up with this solution,by the way. I was the one doing the inside twists that just weren’t working.

You can then decorate with googly eyes, more pipe cleaners, buttons, markers, thread, patches or anything else that floats your boat.

And here we are, showing off our sock puppets to Alton, himself!

>>see Alton and his Puppeteer build a sock puppet<<

Then sit back, put in some ear plugs, and let the kids have fun animating their burping yeast sock puppets.

Want to take it up a notch? Try some of these great, geeky sock puppets ideas.

While not technically a sock, you probably have single gloves just laying around your winter clothes boxes, or can get those really inexpensive ones from the Target Dollar Spot all winter long. But you can do this with a sock with a little creative stitching.

While this is technically a stuffed animal made from socks, you could use this as inspiration to create your own Hello Kitty sock puppet. Use a white sock, pink bow, buttons embroidery thread, chalk or blush makeup, and even a cardboard insert to create the rounded features … here’s a place to start.

I’ll be honest to say that this was an Etsy product that is no longer available. BUT…it’s here to inspire you to step up your sock puppet game. Use a black sock, a felt cape, some black electrical tape, felt odds and ends, and you’ve got yourself a Darth Vader Sock Puppet!

We lost a treasure this year with the death of the indomitable Terry Pratchett who wrote the Discworld Series and The Wee Free Men. My oldest thinks this puppet can also be inspired by the Gamera vs. Godzilla franchise. All I know is that it is really cute!

The pattern for creating the shell is available only for members of the site, but you can easily do the sock puppet head and add a paper plate armor and lets that have been painted to match, then staple them together around the sock puppet. Or, get super-creative with felt. Craft stores are carrying some great patterned felt now!

I love this Zombie sock puppet by Jimill at Etsy. And while this particular one is no longer available in his store (there are others), this would be super easy to reproduce with a chenille sock, ping pong eyeballs (see tutorial below), some paint and feathers or fur from the craft store.

Yes, this is a bit of a reach, so bear with me. The Rabbit of Caerbannog. Sock Puppet. It works. Especially if you create some Huge Sharp Pointy Teeth out of felt that pop out when the bunny mouth is open. What ?! Your kids haven’t seen Holy Grail, yet? What are you doing as a geek parent!? Even if they are pre-teens or teens, you can do a heavily edited version of the movie and still bring them up right! Or just let them watch this Lego version over and over and over again!

Granted, this is just a shot from Alton Brown’s Twitter Account – but the Whovian in me had to share it! Maybe it will inspire you to make an Ood, Adipose or even Donna Noble sock puppet for yourself – I mean the kids.  Yeah..the kids.

Whether you are a Jaws fan, a Shark Week fan, or are super excited about the 18th installment of Sharknado, here is a great shark sock puppet for your kids 😉

(instead of filling the whole thing with stuffing, consider leaving the body cavity and arms empty to use for your kids hands for a true puppet!

If you want more handy tips and tutorials, I recommend these products:

What use is having a Sock Puppet without a stage to create stories on? This great no-sew Puppet theater works for dolls, action figures, and more!

Hello, My Name Is Darcy …

I am a Child of God, homeschooling mom, wife, font creator, Narnian, Whovian, Potterhead, and all other sorts of fun labels to fandoms thanks mostly to how I've learned to embrace the geek culture from my husband and kids. I want to help you learn to embrace the geek for more family fun! Thanks for stopping by!

Get Your Own Pops!